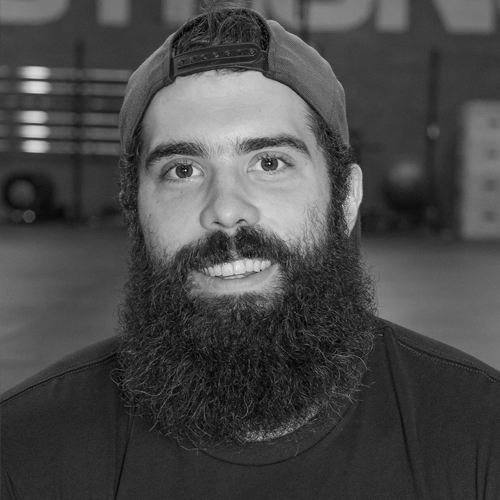 Mike discovered Cross Training in 2012 when a friend showed him a YouTube video of Rich Froning at the 2011 Cross Training Games. Overweight by age thirteen (5’8”, 270lbs., body fat well over 40% at his heaviest), Mike began strength training with his former Little League baseball coach in northeastern PA. A year later, he made his varsity high school baseball team as starting catcher, and a love affair with fitness began. After a four-year career as a starter and PIAA and Lackawanna League All-Star, Mike studied psychology with minors in health science and history. During college, he replaced weight training with distance running, before eventually seeking a program which balanced both disciplines and expanded his overall athletic portfolio. Then he saw the Froning video. Mike began training himself in accordance with the Cross Training methodology while working as a personal trainer as a chain gym. He did all of the WODs without ever dropping a barbell, since the weights weren’t rubber. Mike specializes in the front squat, helpful analogies, and belting out Enrique Iglesias’ ‘Hero’ in the middle of a WOD. He loves training, he loves being able to answer questions, and he loves watching other people achieve more than they thought they could. Mike has previously competed in the Spartan Sprint at Blue Mountain, PA, and plans to compete in the 2015 Cross Training Open.